My longest standing hobby by far is tinkering around in my garage, fabricating all sorts of unique projects.  This sign project (completed summer 2014) was absolutely one of the more exciting ones.  My buddy came to me with a faint idea to take the big long naked yellow wall in his restaurant, and put a sign on it that said “Eat at Stu’s”.  There was really no more instruction other than to add some lights if I wanted, and that would be cool too.  With thirty or so feet of project space to work with and the freedom to design this beast as I saw fit, well… I was down for that. 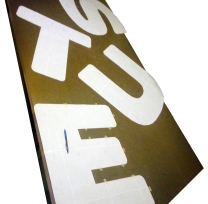 I stated this project just as I do all of the installs I’ve done, take lot’s of measurements and pictures and then just let it simmer for a bit.  The first thing I did figure out was what font to use.  With such a long straight narrow space it had to be something bold and square to look right.  We eventually decided it would be cool to make it look old and distressed too, as if it had been a big outdoor sign on top of an older version of the restaurant.  The color pallet on this design for some reason was not coming into focus for me, so I moved on to the material and construction details.

One benefit of making things for indoor use is that pretty much any material is game.  As big as it was going to be however, I did want to make it reasonably light weight, mainly for transport.  With that in mind I decided to make the letters out of 1.5 inch pink insulation foam, with the face being 1/8th inch hardboard laminated together with green contact adhesive.  Side note: see what I do with the letter scraps in this Quick Workshop Tip video.  Anyway, this made for a very rigid and light structure for the letters.

When I think about old signs I always think about the ones with a wide banded edge that extends past the face of the letters.  This gives a great dimensional quality and I had to have it.  It took me a while to nail it down, but I found the perfect product… cardboard!  Single-faced corrugated cardboard wrap to be specific, ordered from Uline.  It was pretty affordable, but the minimum order for three inch wide wrap was 6 rolls… at 250 feet each. The price was so good I didn’t think twice about the quantity really, and let me tell ya… it was a whole lot of wrap.  It showed up on my front porch and each of the 6 rolls was about a meter in diameter.  Still got plenty if you need some.  This was also the most tedious part of the project, by far.  I used a brush to basically paint on wood glue along the edge of the letters and then used T-pins stuck through the cardboard wrap into the foam until it dried.  Took a long time but with that corrugated texture framing in the letters, and popped up just 3/4 of an inch above the face… it’s a thing of beauty!

Now, because these letters were to be back-lit, I had to concoct a way to have them floating above the sign backboard.  I ended up using cut lengths of PVC pipe, construction glued into holes I made in the foam.  I used long screws that went into the face of the letters, through the PVC pipe and into the backboard.  The heads of the screws were simply painted along with the letters to blend in.  The foil tape you see on the back of the letters is there to help reflect the light from the LEDs. 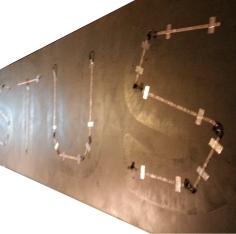 Speaking of LEDs… This step was almost as tedious as the cardboard edge banding.  The soldering process was the hurdle here.  The RGB LED light strips I used had 4 tiny connections per strip that had to be soldered together with jumpers at every bend and turn.  I eventually got into a rhythm and it wasn’t so bad toward the end.  My biggest tip for working with LED strip lights is DON’T EVER USE SNAP ON CONNECTORS!  Always solder, because the connectors seem to add resistance and if you remember your Ohm’s law… Current is inversely proportionate to resistance.  In other words… your lights will dim more and more with every connection.  Soldering is worth it! 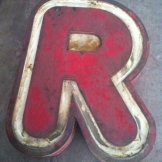 My next step was to beg my wife and friend Grace to help me decide on a final color scheme.  We found this “R” picture on the internet and pretty closely copied it.  I started by painting all of the letters with a base of silver to make them look like metal.

Then I pulled off my most brilliant move of the whole project by getting Grace to supervise the rest of the painting and distressing.  It’s been long enough now, neither of us remember exactly the process but there are plenty of distressing methods out there to learn from on the web.  Just make lots of samples and go get messy.

That about wraps this project story up.  Please consider subscribing to our email list to get weekly highlights of more fun projects like this.  We have lots more of these from years past to tell you about and plenty planned for the future.  You can check this sign out in the flesh at Stuey McBrews in Lee’s Summit, MO.  I made a bunch of other stuff there too.