Every year we try to learn at least one or two new valuable homesteading skills.  What is a “Homesteading Skill” you ask?  Since 2012 it’s been mostly garden based skills such as starting plants indoors from seed one year, keeping them alive long enough to eat another year, and so on.  Ashley learned the basics of sourdough baking in 2014 which is so delicious and way more versatile (think waffles) than I ever knew.

The criteria is pretty simple really.  A “Homesteading Skill” to us should either be an improvement to our health, a capital boost of some kind, or just something we can share in as a family.  Once you get started in these kinds of endeavors it’s clear that most of these skills hit all three marks.  That said, the practice of  Fermenting Peppers I will admit… began most selfishly to satisfy my own taste buds.  I do believe however, the social capital I banked by handing out jars of these beauties might prove to be the superior boon.

The fermentation process is simple but does require a scientific approach.  In other words, we aren’t just improvising a stir fry here.  The good news is the bulk of the work is all done by nature in a “set it and forget it” kind of fashion, as long as we provide the right conditions.  The main key to success for this tasty outcome all starts with the brine.  Oh, and the garlic… Don’t forget the garlic! 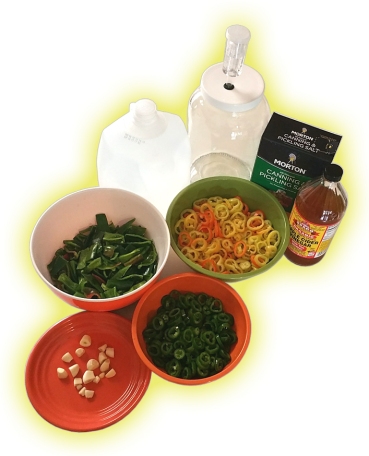 An optional ingredient that we often add in is carrots which are almost as good as the peppers!

Be sure to set aside a block of time to cut up all these delicious peppers.  Be efficient with your cuts so you can fit as much as you can in the jar.  We use a 1 gallon Jar for the fermenting process which turns into about 6 regular sized Ball Jars when canned up.  By the way another bit of good news for you is that this isn’t a messy pressure canning activity.   That said, there is a tricky part which I would recommend practicing with.

The fermentation process by definition requires an absence of oxygen for nature to work it’s magic.  In other words NO FLOATERS!  The first couple of batches we made we had a rough time figuring out how to keep everything submerged in the brine.  One way we manage this now is to remove the seeds from the peppers.   Another method I love is to cut lots of carrot sticks to put at the top of the jar.  These make a great barrier!

Another important note: Keep everything clean!  You don’t want to introduce any unwanted bacteria into the mix.  Remember… practice good science!

I won’t get any more specific on proportions and directions because this is a topic worth doing more research on.  I still maintain it’s easy to do, but there are a lot more experienced folks out there with solid information.  Here are the links to the two sites I learned my methods from.

I guess if you all really want to know I might put out an exact recipe.  Just let us know in the comments below.  But as I said before I think handing out the extra jars of fermented peppers was the best homesteading act we’ve pulled off yet.  Without even asking we got many great things in return.  Some of that bounty included fresh backyard eggs, other yummy foods and even a little flat screen TV for down in the workshop.   I hope to always be growing and fermenting these peppers as long as I am able.  What a WIN!!!

Also, if you were lucky enough to get a jar of these please brag about how good they were below in the comments. Cause you know… I’m shameless.  Oh yeah, and Ashley want’s to know if we can get the lids back? 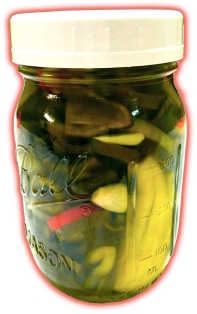